So my DirecTV connection just up and died a little bit ago in the middle of the Matt Bomer episode and I'm flippin' mad.


UPDATE: iTunes will be my savior... Downloaded it and can watch tonight. But directv is still out :(

UPDATE #2: DirecTV was fixed this morning... apparently we had a triple whammy of a bad connector box, loose wires and a bad dish arm. Maybe I shouldn't have been watching Old Yeller, specifically the part where they shot him, when it went out.

Title: Keeper of the Kittens
Author:

sinfulslasher in her Halloween card...
Summary: El has her hands full...

But Halloween was a success and everyone liked our costumes and decorations. There are many pictures floating around of us because lots of families took pics with us and also with our decorations. Of course it's not every day you can have a tied up Santa Claus on display!

Here's some pictures of the big event! 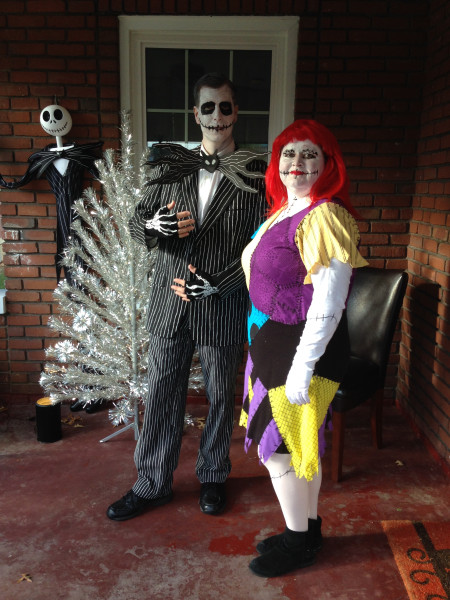 Stolen from just about everyone...

The first five ghouls who come trick-or-treating at my door will get at least a drabble written.

Just comment with "trick or treat!" and leave me a prompt (of no more than 2 words) or just a preferred fandom/pairing if you want to be surprised. Then go ahead and post this in your own journal so I can come trick-or-treating at your place!

Been getting prepared for Halloween. It's a big thing around my house. The street my roomie and I live on is the main trick-or-treating street in town. A few years ago, a guy a few blocks used a counter as kids came up and he ticked just over 2,000.

Every year we host a party and invite friends over and just ask them to bring a bag of candy to help hand out. It's usually a blast. Last year wasn't as a big since the tornado sirens went off in the middle of it all sending the trick-or-treaters running and us sitting in the basement with a few guests. Here's hoping for better weather this year.

Costume wise, we're doing Jack and Sally from Nightmare Before Christmas and the outside will have some NBC decorations to compliment us (yes, we are dragging the Christmas tree out and putting it on the porch). My mom is piecing together my dress. So far I have a secondhand $2 black dress that she is piecing the various fabrics pieces onto. Two t-shirts have been sacrificed for this process.

Below are a few pictures of our indoor decorations...

Title: Moments to Build On
Artist:

whitecollar_bb
Summary: Pete and Elizabeth meet Neal on their first date. AU in which Peter is an accountant, Elizabeth is a girl who likes him back, and Neal's the server turned friend. But when tragedy strikes, Peter realizes what their friendship really means to him.
Link to Fic: http://tbffj.livejournal.com/22322.html

whitecollar_bb
Summary: Neal has loved, and been loved a lot in his life. Through it all, he has learned there are a lot of things he will do to get the affection he craves. When he falls in love with Peter and Elizabeth and they reciprocate, he discovers that he doesn't have to do anything he doesn't want to get what he wants. If only he can convince Peter that he isn't, in fact, broken.
Link to Fic: http://archiveofourown.org/works/2376662

sinfulslasher tagged me, so here it is:

Rules: In a text post, list ten books that have stayed with you in some way. Don’t take but a few minutes, and don’t think too hard — they don’t have to be the “right” or “great” works, just the ones that have touched you. Tag ten friends.

(02) The Owl Mage Trilogy by Mercedes Lackey and Larry Dixon

(03) The Dark is Rising Series by Susan Cooper

(09) Queen of the Damned by Anne Rice

(1) Day off of work! I took the day off today so that I could rest up and then prepare for the yard sale tomorrow. Yard sales are killer, but sleeping on the day before rocked! Hopefully I can post happy sales new tomorrow evening.

(2) I got a refund check from AT&T. Apparently I overpaid when I closed out my home internet account with them and they sent me $30 back. That was a very happy surprise in the mail.

(3) Let's got with another picture. I was playing with Siri on my iPhone the other night and got this lovely response: 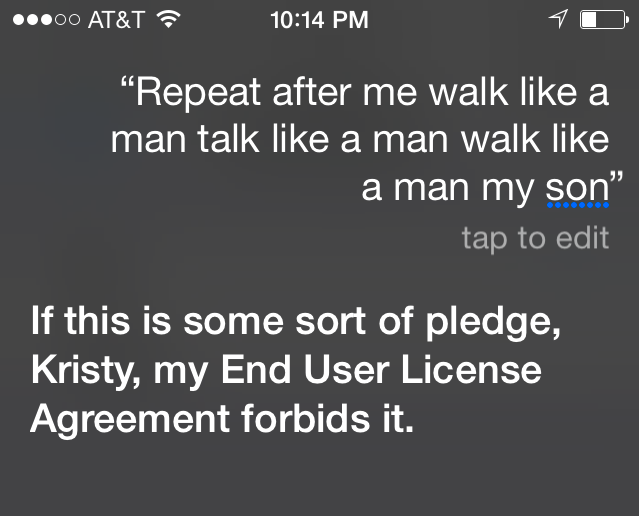 elrhiarhodan because I'm not sure I can do it and I need a challenge.

From my Yearly Story Roundups, find a fic and choose a passage.

Then, post your passage in the comments below, and I will try to guess which fic it's from. If I get it correct, I'll share some information about the story - backstory, character motivation, possible future story ideas or cookies, etc. If I get it wrong, you'll give me a brief A/U prompt and character(s) for a brief ficlet.
Collapse